One of the beautiful structures in the waves of price in the precious metals.

In my view, USDIRR is one of the finest structures in the waves of price in the currencies market.

After five impulsive waves up from May 2009 to Jan 2013 peak at 3970 as the third wave, USDIRR is likely to correct in three waves [leading diagonal (A)-Zigzag (B)-(C)], and ultimately test its previous fourth-wave low at 2644 as the bottom of fourth wave.

The recent strength of USD against IRR is likely a sub-wave of the last portion of a corrective wave(B) which had been underway over the last ten months.
The ultimate target for the wave(B) could be considered 3555 to 3660.

The leading diagonal wave(A) before the corrective wave(B) would suggest a relatively deep weakness as the wave(C) ahead.

The target for the wave(C) may be where wave(C) establish an equality ratio with wave(A) in about area of the previous fourth wave that is 2644 level. 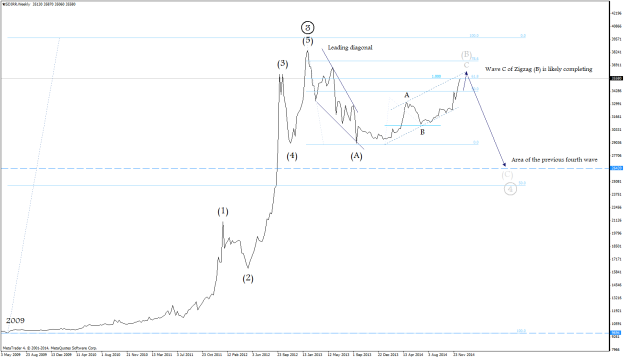